“After we picked Pelipa up in Kayenta, we were on our way to Tuba City, and we were entering Tsegi Territory. I was driving, and it was a warm evening, about umm, 10:00 p.m. We had the windows down. It was a moonless night on this stretch of road, so pitch black we could only see a few feet beyond the headlights.”

“God dammit, that’s the way it was with me," Katie exclaimed. "It’s always like that, Tal.”

“Maybe so. It was so dark I closed my eyes to get relief from the fathomless blackness.

“Oh, you’re telling her the story,” René said as he took a seat and jumped right in. “We had been driving for more than an hour with Tal at the wheel. Pelipa was quiet, and I was trying to take a nap, which was difficult. All three of us were sharing the bench seat in the truck.”

“Wait a minute, René. Tsegi is only a half hour from Kayenta,” Katie said.

“Well, I lost track of time, maybe it wasn’t an hour.”

“Or maybe it was. I lost time on that road too, at least three hours.” Katie shuddered, remembering her ordeal with the skin walkers.

“Oh, we had Crowbear with us too.”

“No, he was in the back on the bed, hitching a ride to Tuba City.”

“You guys left Crowbear outside? What's wrong with you guys? He's an old man and skin walkers hate Hatałii. What happened?”

“My father is a pig headed man. That's where he wanted to ride, and Pelipa and I learned a long time ago that arguing with him wouldn’t accomplish anything. Besides, we rode in the truck bed all the time growing up. Didn’t you, Katie? I remember making out in the back with a girl while we were going a hundred miles an hour.”

Tal reminded her of things she would rather forget. She grimaced in embarrassment and covered her face, chuckling in remembrance of her own high school follies.

“René and Pelipa and I were comfy in the cab. All the windows were open, even the rear slider, that’s how nice it was.” Tal continued.

René nodded with a smile. “So those of us not driving were quietly nodding off. Pelipa, sandwiched between us, laid her head on my shoulder. Then Tal said: ‘We have company.’”

Katie looked at Tal, who nodded in affirmation. “It was very freaky.”

“How? What was freaky? This is suspicious already, even with both of you collaborating.”

“It was a real eerie dark feeling. I saw the headlights in my rear view mirror and realized we had been alone in the dark for a long time.”

“Oh, are you guys telling her what happened?” Pelipa walked into the room with Janie.

“Yeah, those were the only lights we could see. Otherwise, it was pitch dark,” she said.

“But my worry signs still weren’t up, so I turned around to watch them. I saw a pair of headlights appear over the crest of a hill, and then they disappeared as the car went down, only to reappear. I didn’t feel anything like the guys did. I thought it was nice to see someone else on the road.”

“Yeah, then the lightning started,” René said, “and thunder. Huge raindrops fell on the windshield. We knew Crowbear was going to get soaked, so Tal pulled over so we could squeeze in all cozy like.”

“Even after Tal started up to full speed again, I turned around and could see the lights,” Pelipa said. “I was surprised they weren’t any closer because we stopped for probably five minutes.”

“Then I began to worry we were lost,” Tal added. “I slowed down because we were rounding a sharp bend in the road. It was sharp and sudden and unmarked. I don’t remember that section of the road being curvy do you?”

‘No,” Katie shook her head.

“So I’m wondering if I’ve taken a wrong turn. Then time started to slow down, and the atmosphere changed somehow. It took on an otherworldly quality.”

“Yeah, then Pelipa screamed right in my ear,” René said.

“I said Jesus Christ, what the hell is it? I reached across René and Crowbear and held down the button for the door lock. I yelled at Crowbear to grab the door handle; I wanted him to hold it as tightly closed as he could. That’s how scary this thing was.”

“What was this thing?” Katie asked.

“A skinwalker, but I couldn’t see anything at first,” Pelipa said. “It was more of a feeling. You know, the atmosphere was different. It was menacing, ominous. I guess I didn’t know what to expect, but it was scaring the daylights out of me. Then, everything around us stopped. The rain stopped, the wind stopped, and there was no lightning. There was nothing. I was terrified.”

“I kept asking her, what is it, what is it,” Tal replied. “I turned the cab light on and looked at Pelipa. She was white as a ghost, frozen to the door with one hand on the button and the other hand helping Crowbear hold the handle. I could see the goose bumps on her skin, and the hair on the back of her neck and arms was standing straight up, like a cat. I slowed down even more because the road kept bending. Then Pelipa screamed again.”

“Yeah,” Pelipa said. “Tal was turning hard, slowing to almost a stop when something leaped out of the ditch on my side of the truck. We came face to face with the skin walker. It was black and hairy and eye level with us in the cab.”

“It was standing like a man. We knew it wasn’t a real person but it tried to fool us; it was wearing clothes.”

“Really?” Katie was surprised. She had never seen a skinwalker dressed as a man.

“Katie, I saw it too,” René added. ”Whatever this thing was, it wore a man's clothes. It had on a white and blue checked shirt and long pants. Its arms were raised over its head, almost touching the top of the truck."

This thing stayed there for a few seconds, looking into the pickup, and then it dropped out of sight,” Pelipa remembered. "It seemed like a hairy man or a furry animal in man's clothing. But it didn't look like an ape or anything like that. Its eyes were yellow, and its mouth was hanging open." 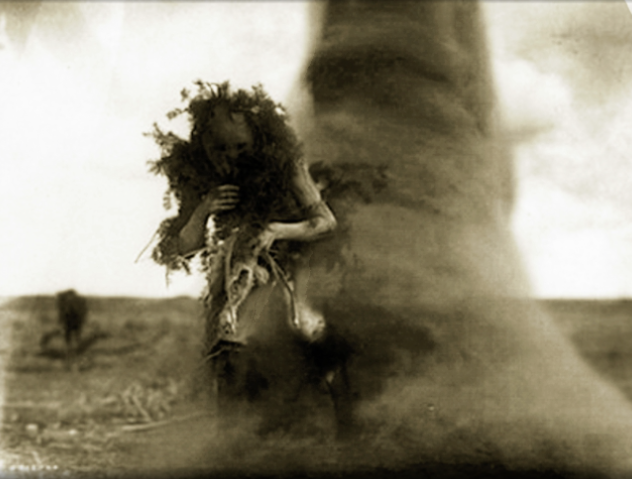 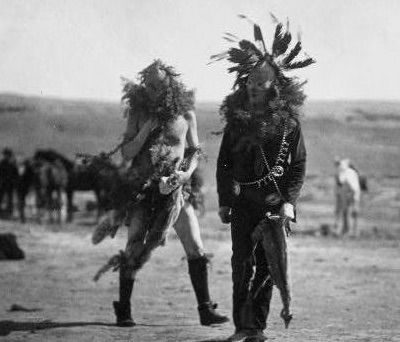