Waiting for Jen to catch up, Marol walked Babe towards the vet zone, where four veterinary teams evaluated the horses.

“There’s an opening. Why don’t you take it? I want to talk to Rory.”

Jen nodded, smiling somewhat. Marol waited for her turn for her preferred vet.

“Good,” she replied with a wide smile. “Jen and I, how are we doing time-wise compared to everyone else?”

“You’re a half-hour behind the first group,” Rory replied.

“Oh well, it looks like I won’t go home with any trophies.”

“But you’ll get a belt buckle if you finish; everyone who completes the ride gets one.”

Rory began his examination. Approaching Babe in a calm, relaxed manner, he walked to her left and patted the side of her neck. “Hi there, how’s my favorite girl?”

Sliding his right hand upward along the coat Rory murmured calming reinforcements while giving the horse reassuring pats before starting his fifteen-point checklist.

Honey, Rory’s trail secretary, wrote the findings on the rider card. Marol stood at the front of the horse, holding the lead rope, letting Rory do his job. Sliding his right hand along Babe’s muzzle, he hooked his thumb under the horse’s lip, exposing the pink gums to the sunlight. Pressing his thumb onto the gums, Rory made them whiten from the pressure. He removed his thumb and counted the time it took for the red color to return, for the capillaries to refill with blood.

“Mucous membranes are pink, CRT is one second,” he began.

“Look, Marol,” Rory directed as he pushed his thumb low on Babe’s neck. “Jugular refill is two seconds… Skin tenting is great,” he said, grabbing Babe’s skin between his thumb and forefinger at the point of her shoulder. “Give this girl an “A” for skin tenting, Honey.”

As he moved around the horse, Rory gently palpated Babe’s butt muscles and her back and hamstrings. “Give her a “B” for Muscle Tone. Next, he palpated the horse’s withers and back for soreness from the saddle.

“Okay, it’s time for the lameness exam, Marol. I need you to trot Babe to the end of the lane and back.”

Marol shortened the lead rope, clicked at Babe, and ran with her to the end of the trotting alley. Guiding her up and back allowed Rory to see any lameness, any unevenness in the horse’s gait.

“Give her a Grade I for gait, Honey,” Rory said, seeing no signs of limping.

“I don’t see any,” Rory reported, as he circled the mare, feeling along each leg.

“She has great spring to her step. Give her an “A” for Impulsion.”

“Give her another ‘A.’ She’s happy, unstressed, and curious. Okay, Marol, everything looks fine, you’re good to continue.”

“Thank you, Rory.” Marol saw there was a line of horses and riders waiting for vet checking. Rory didn’t have time to talk. She would catch up with him later.

“Sure, give me a sec.” Marol fussed a moment with her saddle, hopped on, and they trotted out.

Marol and Jen settled into the next stage of their Tevis journey, moving from a trot into an extended canter. The only noise came from the creaking of leather, the clacking of hooves, and an occasional snort and fart. The changing terrain dictated the spacing and pace of the riders. At first, the trail followed the road, allowing easy conversation. But, in many places, the paths were narrow, uneven, rutted pathways cut into the hillsides, weaving through Ponderosa Pine trees spaced between five and twenty feet apart. Other parts ran through marshy wetlands, or along treeless, sun-scorched south-facing slopes. There were the boulders, big rocks that fell from higher up, ranging in size from watermelons to Volkswagens. Wherever they appeared, the trail bent around them, complicating the path, and slowing the horses.

Marol slowed Babe to a walk when she realized the group was bunching up in front of her. Everyone was still moving, but slower. Looking ahead, she could see the trail increased in elevation, becoming rockier and narrower as it rose. Scrubby chaparral bushes replaced the tall pines. As the angle of the slope steepened, the trail narrowed further, and, except for being chiseled through the rock, would have ended at this steep rocky point overlooking the deep canyon.

“Where are we?” Marol asked. The fellow in front of her replied as the riders waited for their turns.

“This is Pucker Point. It overlooks Screwauger Canyon. Just follow everyone else. Take it slow and easy. Don’t worry. Enjoy the view. It’s just another rock to pass through.”

The confident fellow stepped his horse across the threshold showing Marol the way. She followed and entered the human-made passageway. There was a vertical rock face on their left, an uneven rock floor under their feet, and just a few feet away, on the right, a cliff with a grand view of a yawning chasm.

“Remember, just another rock to go over,” the fellow offered more encouragement. Marol exhaled and focused, smiling as Babe stepped her way across the rocky surface without losing cadence.

Soon the clinking of horseshoes against granite gave way to the familiar dull thud of feet on good old dirt.

Just after 2:30 PM, the women entered the P&R check at a place called Last Chance. It was the halfway point. Dismounting, they waited their turn while the horses sucked water from the trough.

“Sixty-four. You can go ahead without delay.”

Babe also passed on her first test.The trail leaving Last Chance dropped. They followed two miles of zigzagging switchbacks, descending downward two thousand feet into the wooded canyon of one of the umpteenth forks of the American River. The pace was slow; the path was narrow, rocky, slippery, and steep. Some riders, nervous about the dicey descent, jumped off their mounts and ran ahead, leading their horses.

The distant rumble of churning water increased in volume to a low thunder as they approached the bottom.

“We suggest everyone dismount and walk singly across the bridge,” a trail steward in an orange vest informed them.

The bridge was a seventy-foot long swinging bridge made of wood and held up by cables. There were two layers of flooring, thick wood slats that went from side to side, and extended planks lying on top of the slats that stretched from one bank to the other. Safety side rails of thick rope ran from end to end on both sides of the bridge. It swung fifty feet above the foaming, gurgling crystal-clear water of the American River.

When the fellow in front of her cleared the bridge, Marol walked up to the approach. The trail steward gave her a pep talk. “You have the bridge to yourself, but it will start to rock when you are halfway across. Lead your horse, walking by her side. When you feel the bridge move, stay calm, and lead her purposefully. If she should bolt, you won’t be trampled if you are walking at her side.”

Marol was having doubts. “Do you want to go first, Jen?”

“No, you’re in the lead, Marol. You’re doing great.” Just like Cougar Rock and Pucker Point, the Swinging Bridge was another daunting, although doable feat on the Tevis obstacle course. “Just give her a chance,” Jen said. “Don’t be uncertain; you’ll undermine her confidence.”

The bridge stopped swinging a minute after the man and horse in front of her finished crossing. Unsure about the swaying crickety bridge, Marol hesitated.

Standing next to her horse’s shoulder, she shortened the lead rope and gently tugged it, coaxing Babe to take her first step onto the wooden plank. Marol made clicking noises with her tongue and increased the pull on the lead rope until Babe tentatively touched the first wooden plank with her right front hoof. The duo began a careful walk across the Swinging Bridge.

To Jen, watching from behind, Marol appeared stiff.

But Marol could not relax. Every breath she took was shallow and quick. Every step she made was tentative. She could do this; she had to do this. Disregarding the ominous feeling of impending disaster, Marol guided Babe on a slow and steady, straight path along the center of the bridge. They did well, making the first half without slowing.

Marol felt the bridge sag downward as they approached the lowest spot. Just after the halfway point, the bridge began to sway, and each step they took worsened the movement. At the three-quarter mark, a stiff breeze turned the sway into a swing.

Suddenly Babe snorted. Both ears went straight up, and her even, straight steps became uneven and uncertain. Being in a place she didn’t want to be, Babe’s instincts told her to flee. The horse dropped her head and bolted to the end of the bridge, pulling the lead rope from Marol’s gloved hands.

Evidently, this was a regular occurrence because no one looked alarmed. The trail steward at the exit grabbed the line as the horse stepped onto solid ground.

“Thank you,” Marol said to the fellow when she stepped off the bridge with relief. He handed the lead rope to her, and she found an out of the way spot to watch Jen and Gara.

They were right behind. “If you worked Babe harder earlier,” Jen stated as she stepped off the bridge, “as I did with Gara, you might not have had that blow-up.”

That was it. Jen finally did it, she pissed Marol off. “For god’s sake, why are you so fucking bossy?”

Before Jen could answer, Marol realized she hadn’t eaten. Unzipping a bag on the saddle seat she pulled out two candy bars, and handed one to Jen. “Sorry, Jen, I’m just hungry. Here’s a peace offering.”

“Oh, thanks, Marol,” Jen said, “I’m hungry too.” They smiled at each other as they took a moment to eat their snacks.

“Well, girlfriend. It’s time to go.” Marol felt better after finishing the candy bar. Both women remounted and began the long upward climb out of the canyon. The horses often rested along the switchbacks on the way.

Twilight turned to an inky blackness as the riders made their way to the finish. Glow sticks placed along the trail illuminated the route. At 1:35 AM, Marol and Jen arrived at Auburn fairgrounds much later than they planned.

Back to Cocaine Eggs Page 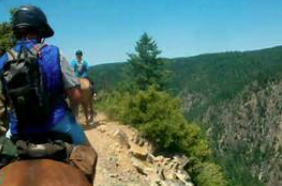 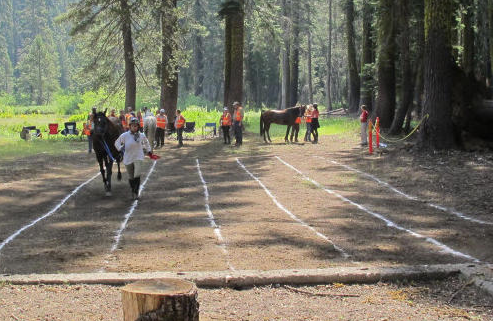 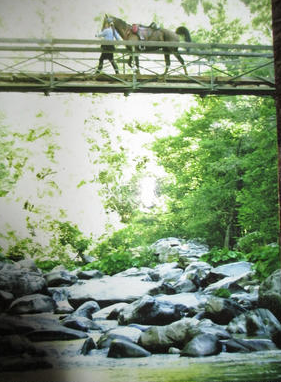