Rory and Marol gathered with Mike and Tsofia in the incubation barn. Rory and Marol were standing next to Mike reading the egg diary. Tsofia opened the hatcher, I larger wooden cabinet that was heated and ventilated, allowing the new birds plenty of warmth and fresh air.

“Yep. I expect these eggs have been in the hatcher two days, if you did remove them from the incubator on Day 40.”

“Here’s one that has started external pip,” Tsofia said as she carried an egg with a penny-size break in the shell to the worktable.

The first step in the hatching sequence is the internal pip, and occurs when the head breaks through the inner membrane, that thick rubbery white lining that separates the growing baby from the air space. Internal pip happens when the baby pushes its head through the inner membrane into the air space and starts to breathe air through its mouth into its lungs. A healthy chick first shows internal pip before any crack in the shell occurs, and a light box allows us to visualize this as the baby moves its head into the air space. Hopefully the eggs in the hatcher today would have already pipped internally by Day 42.

Now the chick rests for a while when it finishes the internal pip, giving time for more hatch changes to show themselves. A healthy chick should be up and about by the time hatch is over, and internal is the final few minutes the body has to change to air breathing through the mouth.

Lung respirations strengthen while the process of breathing through the eggshell shuts down. The blood vessels running from the belly button along the inside of the eggshell constrict, pulling all the blood into the chick. Finally just before hatching the chick pulls its yolk sac inside. Now with the yolk sac internalized, and the blood vessels running out the umbilicus shut down the baby can come into the world. This is the stage the eggs in the hatcher were at.

The egg in Tsofia’s hand finished internalizing the yolk sac and was breaking free of its shell. She set the egg on a circular holder with the airspace on the top.

When egg respiration shuts down the chick begins external pip. Using the pointed protuberance on its beak, the bird can quickly tap a crack in the shell, making a hole in the shell above the air space. Once the head can see outside the chick rests some more then uses its legs to explode from the shell. Peeking into the pipping hole, Rory could see the bird was moving his head inside the air space.

“What are the three pencil lines circling the airspace at different levels?” Rory asked.

“These are the ten day checks. Remember I told you we check the eggs at ten, twenty, and thirty days?” Mike reminded him. “Besides weighing the egg to chart incubation weight loss we also make sure the airspace enlarges as the material in the egg changes from yolk to chick.”

The chick made a noise, a type of churl chirping noise.

“That’s a good sign,” Mike said. “The fact the chick vocalizes means the lungs have matured to the point they can move air in and out strong enough to vibrate the vocal cords. It’s a good sign; it will be a healthy chick.”

The chick churled again, its head and beak moved about, causing the upper portion of the shell to crack wider. Feeling stronger the chick began to batter the cracked shell, vocalizing a warning each time it slammed into the shell, cracking it open more and more until brown and black feathers came into view along with the white rubberlike inner membrane.

Using gloved hands Tsofia helped the bird by pulling away pieces of the cracked egg. “This is a tricky part,” she explained. “I’m trying to help the chick, but I must verify the yolk sac has been pulled in through the umbilicus, otherwise the bird will die from yolk sac infection. I can’t tell yet, so it’s best to let the chick stay in the shell a while longer, see how it is resting comfortably, taking deep strong breaths? We’ll return her to the hatcher for a while and look for others.”

“How long does a chick take to hatch?” Marol asked.

“Anywhere from a half hour to six hours. It’s best to be conservative and let things progress naturally if the chick continues to be as strong as this one.”

“What are the signs of a distressed chick?” Rory wondered.

“Here is where cohort comparisons are important. It is the reason we batch eggs to hatch only two times a week. Batching them together shows us who the laggards are. Those are the ones that need assistance,” Mike explained.

“How do you make sure the yolk sac is internalized?” Rory asked.

“You need to look under the belly. It’s the side almost directly opposite where the head lies. Say the head is at 3:00. The yolk sac will be near the 8:00 position. Tsofia, bring our chick out. I have a feeling it’s ready. I’ll show Rory the umbilicus,” Mike decided.

Tsofia set the chick back on the table. Carefully Mike cracked and removed bits of shell. “Yep, the umbilicus is fine,” Mike said. “Now for post hatch processing. We apply betadyne ointment smeared on a gauze. We’ll tape the gauze to the belly button with masking tape around the entire abdomen in a crisscross pattern. The diaper is changed daily for four days. We place a microchip in the pipping muscle; it's the big muscle behind the head, and finally we weigh the bird. We will weigh the baby every day for two weeks. A normal chick loses weight for the first five days while it finishes living off the nutrients in the yolk sac. Then we should see a daily increase if the chick is healthy and eating 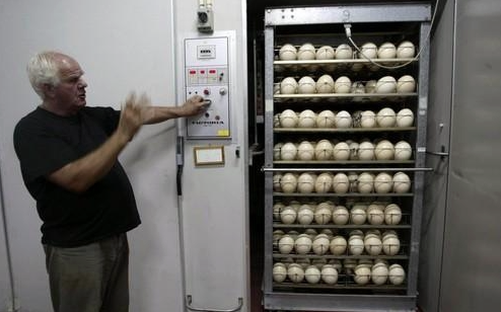 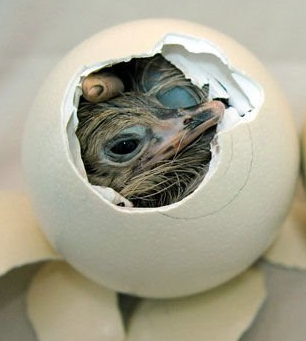 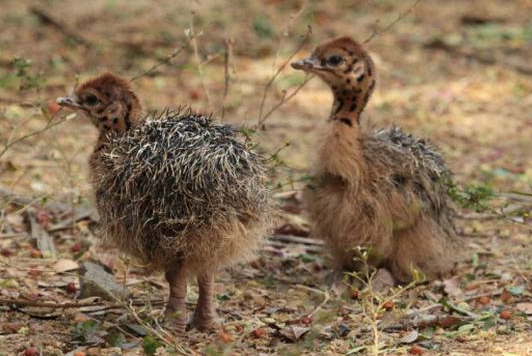