Coyote is the inimitable trickster common to legend in most Native American tribes. Both sacred and profane, Coyote gives birth to mischief and promise, he is a deceiver, but also a deliverer of good. Through his actions, change becomes possible; and change, through good and bad, brings newness and breaks conformity.

And it happened that Coyote did not like the new name given to him by First Man: First Angry. So he tried to steal the name of a mountain and then The People named him He Who Moves Everything That Grows. For a while, he was content. Coyote started raising a fuss again; this time he wanted more duties. So First Man gave him control of wind, rain, and a part of childbirth, and for a while he was content.

“There’s a lot of coyote activity around the reservation, Katie.”

“More so in the past two generations. With the extermination of the Mexican Wolf in the early 1950s, the humans are the coyotes’ only predators. Now they are as plentiful as rodents. We miss the wolf. We call him ‘Máiitsoh.’ He is considered a messenger, and is honored by the Diné. Now only our dogs keep the coyotes away.”

“Your sheepdogs don’t seem very imposing or dominant or even protective, Katie.”

“They may be small, but they do their job well! Remember, although a coyote is brilliant, he is not very big.”

“Which means that the coyote is not a gorilla-like, kamikaze-type creature that will tear up fences and rip our dogs to pieces to eat our sheep. He is too smart to put himself at risk. Some call him cowardly, others call him cagey,” Katie chuckled.

“Why are you laughing?”

“Coyote, we call him Mąʼiitoʼí Áłchíní, is a pain in the ass. However, the Diné have grown fond of the little shit because we use him as a scapegoat to explain why bad things happen. We even blame him for bringing death into the world.”

“Long ago the Diné put an animal skin on a body of water. They agreed if it sank, there would be death in the world. If it stayed floating, no one would ever die. When the people turned their backs, Coyote came and threw pebbles on the hide until it sank. He told the people if there were no death, they would run out of places to live. That is why death comes for each one of us.”

“That’s a strong statement. It lays a lot of guilt onto one animal.”

“He deserves it, René. Let’s stop here.” The night was inky black with stars of amazing brightness.

“Do you see how bright the Milky Way is?”

“Yet you can make out the regular constellations, right?”

“All of the stars are brighter because tonight is a new moon. The moon has gone to visit the sun, which helps me explain the mess coyote made of the stars. When you look at the constellations, they look deliberately placed. But the Milky Way is arranged haphazardly; the stars swirl into a mix without defined figures, that’s because of coyote, that loss of starry orderliness.”

“Well, the messy stars are there because of Coyote. Realizing the sky was too dark, First Man and First Woman put together the Navajo constellations, deciding more lights were needed up there for nighttime travelers, especially when the moon did not shine, like tonight. First Man sketched a design on the ground and gathered together fragments of rock-star mica. He would use these shiny pieces of rock for the stars.

“The first thing he put up was the North Star. Unlike the other constellations, the stationary Polaris became the guiding light for nighttime travelers. After setting the lodestar, First Man thought up more and more arrangements.”

“Just like some people so carefully place ornaments on their Christmas trees,” suggested René.

“I suppose so,” Katie smiled. “Anyway, while they were busy working on the stars, Coyote came up to them and asked, ‘What are you guys doing?’ The first three times they responded, ‘We’re not doing anything.’ The fourth time he asked they replied, ‘We’re busy with something very important. Leave us alone.’

“Hurt and offended, Coyote ran across a hill, and was gone for some time. However, he continued to watch becoming impatient because the star hanging was going so slowly….”

“Shh. Sit and listen! Finally, Coyote decided to do it his way. He ran in and grabbed the mica pieces First Man left on the ground, and threw them into the air; they stuck and remain in their mixed up positions. However, he didn’t throw all of them hard enough, and one star fell back to earth. Coyote picked it up, and put it up there with his hand, hanging it low on the southern horizon where it shines brightly early in the morning. He named it Ma’ii Bizò‘, the Coyote Star.”

"You can't see it until winter. That's why and telling of Ma'ii Bizò' stories is restricted to October through February. You bilagáana call it Canopus. It is the second brightest star in the southern sky, and was also used by sailors: it was their southern pole star. It’s hard to see. Look directly south near the horizon. Push out your arm and make a fist. Ma’ii Bizò‘ will be a red star halfway up your fist."

“I can’t see it.” René pushed his arm straight in front of Katie and peered through her window. “Maybe we should get out.”

“Another way to locate Ma’ii Bizò‘ is to identify the three stars on Orion's belt. Follow the belt line towards earth. Sirius lies midway between Orion and us. Locate Sirius, then drop stright down almost to the horizon. Both Sirius and Canopus are the brightest stars in the southern sky in the winter. , we’re probably too close to the hills here, René.” Katie scanned the southern sky.

“It’s nice outside; we should go for a walk.”

He was right, it was a beautiful time for a stroll, very romantic, but she was with the wrong fellow. 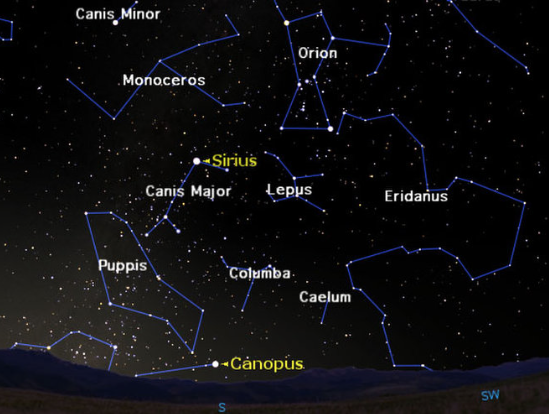 One of the most controversial characters among the Navajo is Coyote, prince of chaos, who is also the most notable catalyst. Transformer, troublemaker, trickster, deity Coyote is all of these, and more. He stole the stars laid out by First Man and scattered them, willy nilly, across the heavens. Yet, from Coyote's unruly behavior, changes came about that made life better. From Coyote's foolishness, mortals gained wisdom, learned what, and what not, to do. Coyote, as the forerunner of change, created ways of doing things so that customs new moral codes, ceremonies, designs for living came into being. Coyote's selfish acts thus clarified the boundaries of human and animal conduct. Acting as the wise fool, Coyote is able to speak and act as others of the holy pantheon, due to inherent decorum, cannot. His role was, and is, a large one. In the literary sense, he is a court jester, moral chorus, and commentator.

According to Navajo lore, it is not Coyote's unusual atomic structure that gives him his regenerative gift (like Wily Coyote in the popular cartoon, he is virtually impossible to kill), rather it is his ability to hide his vital parts from harm by storing them in the tip of his tail. Coyote imparts a message which has a positive value for mortal beings: how to protect oneself from physical danger. Pg. 45