Chauvet Cave is the earliest example of an ancient church. It is a multi-room cavern. Many of the walls portray animals, bears in particular but also horses and bison and antelope. The bear room was important. Besides the fifty plus bear skulls lying haphazardly on the cave's floor, one skull was designated the holiest. It was placed on top of a flat triangular boulder. Both the skull and the point of the triangle were set to watch the doorway of this holy room.

Primitives felt the cave was the passage to the divine. Ancients believed life came from earth. And so holy men ventured inside when the bears weren't hibernating, to open a dialogue with the spirits.

Hugh set the camera down. The cold dampness of the cave was refreshing; the walls were wet with seeping moisture.

Jean handed everyone a white helmet with a spelunker light on top. “Do not touch anything in the cave, and please do not step off the two-foot wide metal walkway. You will notice the walkway is quite high off the ground at some places.” He now gave them each a harness with a length of rope attached. “There are carabiners on the end of each rope,” he continued as they donned the harnesses, “and you will notice the cable that follows the ladder here and the walkway below. Make sure you clip your carabiners to the cable as you progress. It is rare that someone falls, but this is a precaution to save you and the cave from harm.”

Katie and Rory let the others go first. No one spoke as they descended the ladder and wiggled through the tight passageways that led to the cave’s main rooms.

“It wasn’t always this tricky to get inside, but the main entrance was sealed by a rock slide thousands of years ago. That’s what kept the cave in its pristine condition; it lay undiscovered for millennia,” Jean explained when they gathered for a short rest at the entrance of the main chamber.

Jean flicked a light switch revealing a cave of incredible beauty, with large areas of the roof covered by veils of red and white streaks flowing down the limestone walls.

Marol and Hugh set up an interview stop. Marol narrated. Darrin, Hugh's assistant, held a bright light on Marol and aimed the beam to highlight the wall art as Marol pointed it out. “In this alcove on my left, we have what is considered one of the most important panels of the Chauvet Cave. It contains twenty animals. The paintings are quite dramatic, highlighted by the rhinoceroses confronting each other. This kind of interactivity is not seen anywhere else in Paleolithic cave art. And here we have powerful images, drawn mainly in black, of life-size heads of horses. They are so strong and life-like they seem to stand out in 3D from the wall. The rest of this wonderful panel features a turbulent grouping of horses, reindeer, aurochs, and two fighting rhinos, all caught in constant movement.”

The group stopped to focus on the art. With the camera set, she continued with her narrative. “These four horse heads were drawn in charcoal. The artist who drew them mixed the charcoal with the surface clay to obtain various hues and visual effects.”

“Cut,” Hugh said when Marol nodded. They and their assistants packed up the equipment and proceeded deeper into the cave.

Walking behind the others, Katie turned and grabbed Rory's hand. “This is so cool, Rory. Are you impressed?”

“Yeah, I am,” he said as they followed the others in single file, on the two-foot-wide catwalk, into the next chamber. Here, a pride of cave lions was skillfully drawn, using only a few adeptly placed lines to convey the power and strength of the beasts. Marol stopped as Hugh filmed them.

The next gallery revealed red paintings of bears and a spotted leopard, as well as dots, handprints and strange geometrics. Jean’s torch beam illuminated heads of bison and other animals, and another chamber depicted Megalaceros, a Giant Deer with twelve-foot long antlers, the biggest deer that ever lived. Nearby were engraved images of aurochs, the prehistoric ox, which became extinct about 6000 years ago, and more rhinos, as well as an owl on a stalactite, and lions. The cave lions were twice the size of lions we know today.

“Come this way, I’ll show you the auroch panel.” Jean led them a short distance to a panel of aurochs having curved horns. A rhinoceros was drawn in space underneath the aurochs.

“They look like Angus bulls with curved horns,” Rory decided.

“The aurochs were a type of huge wild cattle, inhabiting Europe, Asia, and North Africa, but are now extinct; it survived in Europe until 1627, and they are the ancestors of domestic cattle.

“Were all these animals held in reverence, do you feel?” Rory asked.

“Certainly they were important to these people, Rory,” Katie replied. “Important enough to walk inside a dark cave between bear hibernations. Important enough to wander to the very back of this mysterious and deathly still cave. All they had to pierce the darkness was whatever type of primitive firelight torches they used back then. Their hatałii are telling us something here, they are showing us the world’s special creatures, especially the bear. There are so many bear pictures. These animals on the walls are the ones the tribe spent hours watching, either trying to avoid or stalked as prey.

Yes going in a cave is different than exploring the beach, or walking the woody paths when hunting and gathering. Why else, except for a religious motivation, would a person want to be here? There is no reason for a person to explore a cave’s deep blackness other than to satisfy a religious zeal.”

“Primitives felt the cave was the passage to the divine,” Jean was listening. “Ancients believed life came from earth. They saw the natural cycle repeated year in and year out, and they followed the cave bear, seeking the same understanding these majestic animals possessed, retiring to another place each winter using caves as their doorways. There were too many dramatic coincidences like these that drew the primitive mid to associate caves with the divine. And so some men followed inside in an effort to have their gods explain more of the world.”

There are ten chambers or galleries in Chauvet Cave, extending almost a quarter-mile into the earth. Jean led the group deeper into the cave complex.

“The Hillaire Chamber is the beginning of the most religious portion of the cave,” he began after they stopped in a large room with a thirty-foot depression in the middle, where the floor dropped twelve feet. The walkway led around the hole to walls with more images.

“I call this the horse chamber,” Jean said. “It has beautiful compositions of the beasts etched into the surface, right here, or charcoaled on, like the group of four over there,” he continued, pointing to a beautiful panel of four charcoal outlined horses.

“The cave splits right and left at this point. The Skull Chamber is to the left, and the Venus and the Sorcerer are to the right. Let’s go into the Skull Chamber first, it’s also called the altar of the cave bear.”

From the Hillaire Chamber they followed Jean around a curtain of stagmites into a vast and circular kind of amphitheater. He adjusted his torch to spotlight a large triangular granite boulder standing eighteen inches high, having three two-foot sides and a flat top. The apex of the granite behemoth was pointing to the entrance. And on top of the flat top sat the skull of an animal, facing the doorway, warning intruders away.

The scene sent prickles up Katie’s spine when she realized the skull had been carefully placed.

“The black on top of the altar is from a fire,” Jean said. “The soot has been radiocarbon dated. It’s 32,000 years ago, making it impossible to escape the conclusion some form of ceremony or perhaps sacrifice has taken place. This is the earliest altar ever found.”

“I see several dozen skulls on the floor around the altar,” Rory said. “Are they all cave bears?”

“Yes, and there are fifty-three skulls,” Jean replied. “Another reason to believe the primitive mind held the bear in reverence.”

Turning around he backed the group out of the Skull Chamber into the other religious region.

“The last and deepest of the Chauvet Cave chambers is the home of the Venus and the Sorcerer. Point the camera to this large limestone stalactite,” he said pointing to a large and wide cone of limestone hanging three feet from the roof. He paused a few minutes for Hugh and Darrin to get the camera and lights arranged perfectly.

“It is on this hanging outcrop the Venus and the Sorcerer are drawn in black charcoal. Venus’ black pubic triangle is at eye level and seems to be the heart of the composition. It is shaded in with black pigment. The white vulva slit appears to have been done later with a pointed tool and is clearly indicated by a vertical line incised strongly enough to cut through both the black pigment and the yellow surface film of the rock. This Venus is absolutely classical and her proportions the legs, with plump thighs, finish in this point with the feet not shown.

The Venus is not isolated. Other objects have been drawn around her. Higher and to the left are two felines, a mammoth and a small musk ox. And one object was drawn on top of her, although not across her. The "Sorcerer" or man-bison was drawn later a little over Venus’ right side here. That cannot be coincidental.”

“It appears the early mind revered the cave bear, the bison, and the cougar,” Rory suggested.

Buy an eBook. See below 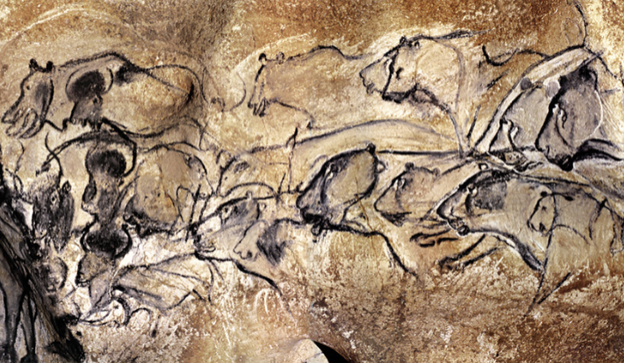 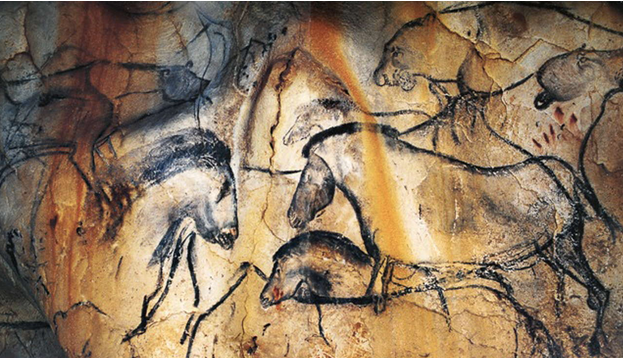 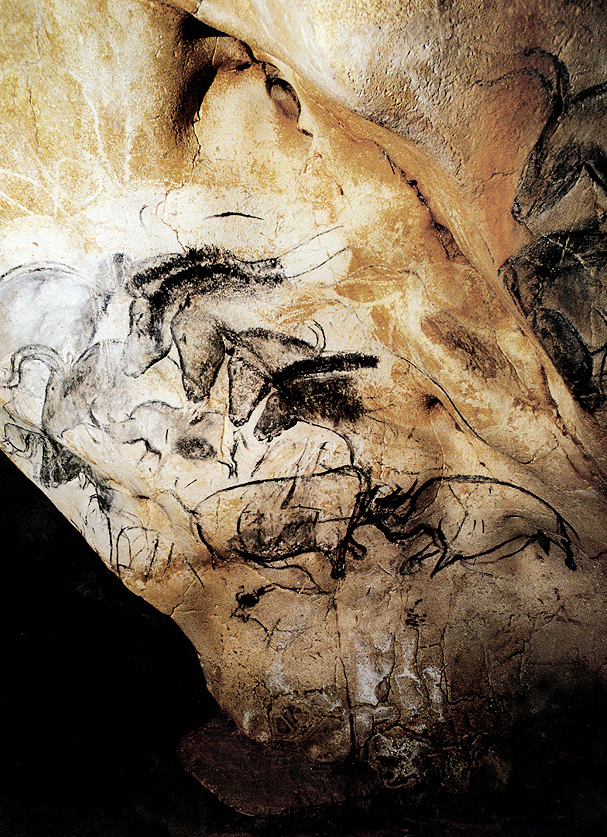