"Oh, here it is South Bay Drive, we're almost to the park.”

They drove in silence until they left the intersection that defined downtown Los Osos. The buildings thinned out, and the ocean scent became prominent.

“Oh my, do you smell that? It reminds me of home, of Brisbane, of Gatton…”

“The smell of the ocean?”

“No silly, the eucalyptus smell.”

Jen laughed as she pulled into the equine day use parking lot, and they went began saddling and preparing for the ride. The lot was on a bluff, fifty feet above the beach. Carrie finished first and stood next to Babe holding her rein while she stared off into the ocean’s horizon.

“I love the smell of salt water, and the noise of the waves!” She said when Jen and Candybar walked over. “Which way to the beach?”

“First we're going the other way. I want to take you to Oats Peak, the highest spot in the park,” Jen said pulling herself into the saddle. “Montana de Oro is a great place to work horses. With these steep hills and deep sandy pathways, it's an excellent place to develop their endurance. Follow me,” she said, as she clicked at Candybar and squeezed her knees together. Carrie, not yet fully settled into her stirrups, was trying to stabilize her seat. Babe was fearful of being left behind and jumped into cadence behind Candybar. Carrie lurched backward with the sudden movement.

“Jen, luv! Slowdown! I haven’t been riding for some time. Take it slow for the first bit, please.”

“Okay Carrie, sorry. Candybar and I haven't ridden here for a while, and we got too excited.”

The horses were in good shape. They took the uphill at a steady walk, allowing the girls time to appreciate the wildflowers and the scenery. Montana De Oro’s magnificence increased the higher they went. The first part of the trail was a slow rise to the hills. Lupines, poppies, and Indian paintbrush carpeted the bench land during springtime. Now the grasses were colored in their late summer browns. As the trail ascended, more and more of the coastline came into view. Soon they could see the beaches where the surf turned into mist, and the waves smashed onto the dark rocks.

“Carrie! Stop a minute. Look over there; do you see that sand spit?”

“We’ll be riding down there in an hour. And that giant, round, dome shaped rock on the other side is Morro Rock.”

At the top, they stopped to let the horses rest. They dismounted and sat across from each other at a picnic table the park rangers had somehow planted there.

“What a beautiful scene!” Carrie exclaimed.

Yep," Jen agreed. They shared a bottle of water between them. She looked at Carrie and smiled. "Let's go down and see the beach.”

They made it back quickly, as the horses sensed they were going back they focused more energy in their strides. The girls stopped at the parking lot to let the horses drink their fill at the water trough before pushing on to the beach.

They followed deeply rutted trails carved into the steep bluffs. The sand became deeper and deeper as they made their way down to the oceanfront. Closer to the bluffs massive dunes grew on either side. Beach grasses stabilized the dunes somewhat. But there were vast areas of shifting sliding sand where the wind carved a series of solid waves into the exposed surface. Jen avoided these places because the horses would bog down and run out of energy if they plowed their way through the deep, loose sand.

At the base of the cliffs they weaved their way between giant boulders. As the waves pounded the beach and the bench land, the face of the fifty-foot tall cliffs had eroded away. Any large rocks that became overexposed fell from the cliffs onto the beach making a natural breakwater that stopped the crashing waves from eating further into the hillside.

As they neared the tidal surge region, dry, fluffy sand gave way to glistening wet smoothness packed tightly from the water. Urging Candybar into a quick canter, Jen galloped on the wet and firm sand. Babe jumped into high gear as soon as she saw Candybar bolt ahead. Soon both were running side-by-side down the hard-packed beach. They rode this way until Jen slowed to allow the horses time to catch their breath, before pushing into the water.

“Carrie, this is where we take the horses into the ocean. Are you ready?”

Making sure she was well balanced in her seat Carrie asked Babe to walk straight into the moving water. But Babe didn’t want to go there. The water, curling around her feet, caused her considerable unease. She fidgeted and danced with her eyes wide and her ears pinned in worry. She stepped sideways in protest of Carrie's continuing command to go forth.

But Carrie was an excellent rider. Urging Babe forward verbally as well as with leg cues, she squeezed her knees together and didn't allow the mare any chance to retreat. When Babe figured out she could only move forward she took four tentative steps into the waves, snorting, and fidgeting and finally acquiescing to Carrie’s steady insistence.

“Jen!” Carrie yelled. The proud Aussie had Babe standing up to her knees in the swirling eddies. She turned and began walking parallel to the water’s edge.

“You need to try this!” She yelled at Jen, as the taller swells lapped her boots.

Carrie walked Babe out of the water, and Jen rejoined her.

The sand spit is a long beach extending nearly four miles along the coast from the mouth of Morro Bay to Montaña de Oro State Park. It is a thin and desolate dune barrier sturdy enough to withstand the waves and protect the bay behind it. Some of these dunes rose over fifty feet. Jen and Carrie cantered the entire way to the tip of the spit.

Coming to the end of the sand spit, they slowed and stopped. Directly in front of them, across the five-hundred-foot harbor entrance was Morro Rock, the guardian of Morro Bay, a six-hundred-foot high extinct volcanic mound.

"The rock is one of the Nine Sisters," Jen explained. "It's an old chain of long extinct volcanic peaks. Morro Rock is the most famous. Originally surrounded by water, the land side was filled in with rock quarried and ferried from Catalina Island,” Jen explained.

“They built a road to drive to the rock?”

“No, they created it to make the harbor. Morro Bay isn’t a natural harbor. This sand spit we are on extended almost to the rock, so this would be the harbor mouth," she gestured toward the open waterway in front of them. "And they filled in that part over there,” she said, pointing to the artificial breakwater.

“And that finishes our equine tour for today,” Jen said. “Do you want to hang out here, or start back?”

“It’s getting foggy and chilly here. I’d rather be more inland,” Carrie decided.

Jen agreed, and they galloped back to the Montana De Oro trails.

Montana de Oro: Death From Down Under, Chapter 35 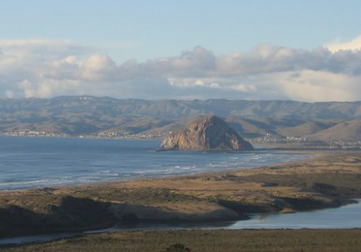 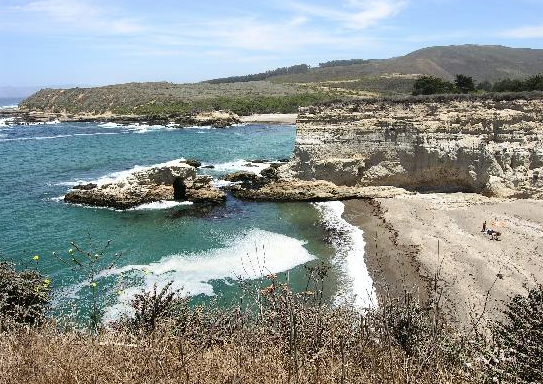 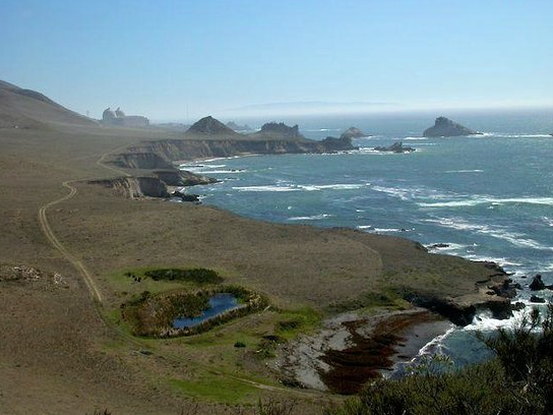