Caves were our first churches. The Chauvet Cave altar has a bear skull placed upon a prominent stone inside The earliest religious altar suggests ancient people worshipped

“We know bears lived there because of the many images painted on the walls, and the animals themselves marked the cave walls by repeatedly raking their claws across the limestone, incising sets of four parallel lines. Plus there were many sleeping places the bears carved out, their individual bedrooms for hibernation.”

“Then why were people drawn to the caves?” Rory asked. “It must have been important to them to work around the bear season, or should I call that the people season?”

“Caves represent a world hidden from view, they are dark and mysterious and dangerous. Magic or natural energy was thought to exist here. In myth and legend caves provided access to the supernatural. Like the spirits that inhabited them, caves harbored sources of power. They served as passageways from the sky to the earth, and from the earth to the underworld. Because caves were believed to be places of emergence, they became the center of the ancient world, and the goddesses coming forth were naturally in charge of fertility. As the womb of Mother Earth, the power found in caves was tremendous.

So, being careful of cave bears occupying the place during their winter hibernation, humans came in when it was safe, and painted their world on the walls of this cave. Other animals were painted besides bears; buffalos surge across the rock background, rhinoceroses are doing battle, lions search for mates, while horses with dark manes canter in formation. And more bears. These primitives revered the bears. Almost two hundred bear skulls are found here. It seems that whenever a person found a skull outside it was the shaman’s duty to return it to its hibernation place.

One room became a holy sanctuary when a large flat limestone rock was requisitioned for holy rites. A fire was started on the rock. You can tell because there is a layer of black soot over the entire top. Then a cleaned white bear skull was placed on top, it’s snout pushed forward towards the doorway, ready to attack any intruder. Yes, this was a very off-limits place, Katie. This is the oldest evidence we have found for human religious activity, so it will be the beginning of the documentary.”

“How long ago was this happening?”

“Thirty thousand years ago. These are the oldest cave pictures ever found. The other caves are only half as old as Chauvet Cave.”

“Why did they worship bears?” Rory asked.

Bears appear in myths throughout the world,” Marol explained. “They are symbols of nature’s capacity for rebirth. Bears die a metaphorical death each winter when they retreat into their caves, exactly like Mother Nature does each fall. And when Mother Nature awakes she brings forth the greenery that makes the bear wake up as well. This annual death and rebirth was of utmost importance to our ancient ancestors. Extensive rituals were performed during spring to persuade the reticent fertility goddess to come forth. And in the fall Thanksgiving festivals, mortals gave the gods the pat on the back thankfulness for watching after them.”

“So this bear skull that guards the Holy-of holies, is it male or female?” Rory asked.

“Interestingly, bears were always connected to the female life force, either by giving birth as a female, or being a female cub of a badass mama bear.”

In cultures around the globe people throughout history decorated caves with images of their gods and symbols of divine forces. The shamans retreated to the caves to perform sacred rituals and conduct secret ceremonies. Now, here comes the mind blower, are you ready?”

Nodding, both leaned in.

“Of the scores of pictographs in the Chauvet Cave, only one has a human depiction, a picture of a vulva is painted on a stalactite. This is where goddess worship began, in caves. Female deities and goddesses were forged from the underground when the primitive mind equated caves with woman functions.”

“I never thought of that,” Katie said. “Although our creation story does have us evolving from the underworld. Yes, I can see the relevancy here, Marol.”

“So that means the god of the cave was female,” Rory decided.

“One hundred-percent of the time, Rory. A Paleolithic fellow elevated female reproduction to the realm of the Gods when he painstakingly painted a woman's pubic triangle on the wall of this mystical place. Knowing life emerges from a female’s vulvar lips, prehistoric shamen believed their cave goddesses carried similar life-giving powers.”

“How much of the woman is depicted?” Rory needed a better picture.

“Place the pubic triangle in the center…”

“I usually do,” he replied.

“Stop it. You’ll see the black triangle outlined by the upper part of the legs, sort of like a Venus figure composed of a vulva attached to incomplete legs.”

“Nope they’re not there, the stomach is covered by the bull, a minotaur.”

“Yes, a minotaur, a bull with horns is standing on the lady’s left side, protecting her, or coveting her we don’t know. But he is definitely above her in the painting, surely influencing her.”

Chauvet Womb of the 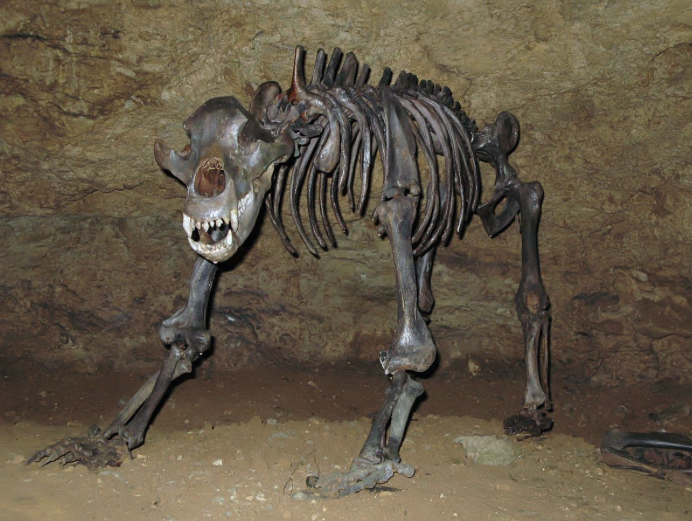 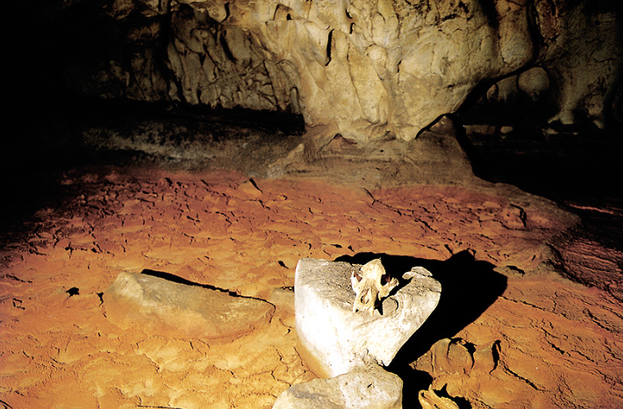 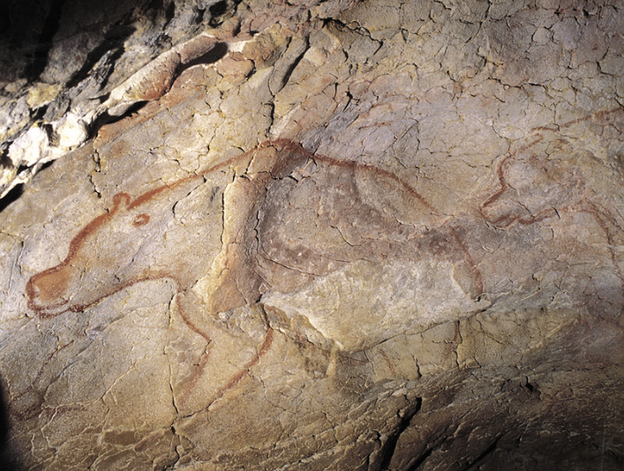