The next morning Rory came in late because he was still learning the art of performing an intravenous drip on himself. Honey met him at the door holding an orange cat.

“Good,” he chuckled, seeing the cat in Honey’s arms. “What do you have there?”

“It’s Pumpkin. Steve Derks dropped him off. He’s taking Janice to a doctor in SLO for her back.”

“He quit eating and is turning orange. He looks like that bottle of Ceftiofur I made up last night. And he’s orange inside as well as outside.”

“Look!” Honey exclaimed. Opening the cat’s mouth Rory understood. The inside of the mouth was no longer pink. It was an orange color.

“Steve didn’t say anything about that. He told me Pumpkin stopped eating and has soft stools. He thinks it’s some sort of stomach upset.”

“Not if he’s jaundiced. The problem is more severe than he thinks. Let’s start some tests, then I’ll call him,” Rory decided.

Rory followed Honey into the exam room where they began an evaluation.

“It’s called jaundice or icterus, Honey. It comes from the buildup of bilirubin. Normally we produce small amounts of bilirubin. When our red blood cell become too old they are taken apart by cells called macrophages in the liver. One of the normal byproducts of this process is bilirubin. Jaundice is caused by too much bilirubin. This occurs either when bile ducts are clogged, as in liver disease, or when the red blood cells are being destroyed too fast. This means I’m looking for blood or liver issues and a quick way to find out is to pull some blood and run a PCV. Hold the kitty so I can pull a blood sample from his jugular vein.”

Retrieving the blood Rory divvied it up between tubes and slides for his tests. One of these was the PCV, the packed cell volume.

“Aha, here’s the problem!” Rory exclaimed as he placed a hematocrit tube atop a graph.

Compare this to a normal blood sample:

“The fellow’s anemic. His PCV has dropped to 8% and the serum above the blood column is as orange as Pumpkin. Something is killing off his red cells.”

“No wonder he’s panting, he has hardly any red cells left,” Honey said.

“Um, hmmm, this kitty has jaundice due to anemia. It’s not his liver. There is something breaking the cells apart. Let’s run an FELV/FIV test and also a mycoplasma PCR,” Rory decided. “In the meantime, let’s start fluids and antibiotics. We may need a blood transfusion, too. And send this blood tube and slides to IDEXX for a CBC.”

Rory went into his office to call Steve. Honey was setting up the in-house tests when the front door ringer dinged. She came into Rory’s office looking mortified.

“Doc, I forgot to call Denise Frisco to cancel her spay,” she said gently, cringing inside because she’d not changed the schedule.

“I thought we discussed this,” he said, his irritation rising.

“I was looking at the wrong Tuesday when I booked her,” she apologized.

“Call Denise and change it,” he decided.

“Oh,” Rory replied, looking at his bandaged arm. “How the hell can I do surgery when my left hand won’t fit into a surgical glove?”

“Use one of the sterilized sleeves you have for embryo transfer work,” she replied.

“Here, try this one,” she said, pulling one from her shelf. Sure enough, the plastic sleeve covered him from fingertips to shoulder.

“Maybe so, but I’d feel better wearing a surgical glove on top of the sleeve. Then I’d have a better grip,” he said. Grabbing a glove from the surgery drawer he opened the package and fit the glove around his bandaged hand.

“Oh, I can do this,” he realized in satisfaction. “As long as I have a helper, at least at first. The rubber glove gave Rory the grip he needed to grab and tie his sutures. The surgery went well in spite of the fact Rory needed to relearn how to tie sutures using only the fingers of his left hand without the thumb.

“And you can still do your horse repro stuff,” Honey added, seeing Rory successfully manipulate his ties.

“I use my right arm for rectal palpations, Honey,” Rory reminded her. “So, I’m ready for that, too.”

“What did you tell Mr. Derks?” Honey asked.

“Pumpkin has two infections; a mycoplasma and an FIV infection. The FIV virus acts like the AIDS virus and depresses the immune system, so it allowed the mycoplasma to jump onto the red cells and attack them.”

“What are his chances?”

“Not good. Steve declined the blood transfusion. They aren’t that attached to Pumpkin, but he agreed to a round of doxycycline to kill off the mycoplasma.”

The bacteria are transmitted from infected to naïve cats by blood-sucking arthropods (fleas and ticks, and possibly mosquitoes). Outdoor cats prone to fighting with other cats can become infected via bite wounds. Outdoor cats that have poor flea and tick control are at an increased risk of developing FIA. Young, intact, male cats are also at a higher risk of becoming infected with this organism.

Pumpkin had a concurrent kitty aids infection called FIV. It is diagnosed through a blood test done in the office. That's what exacerbated the mycoplasma infection:

The FELV-FIV test showed Pumpkin was positive for FIV, that's why the cat was hit so hard by the mycoplasma, he has a concurrent kitty aids problem. (See the line under the T?).

Pumpkin went home on Orbax and doxycycline and waited for more lab results.

But even with FIV, Pumpkin did well. When Rory saw him a few days later his temp had gone from 99.8 to 102.8, a good thing, his body was rallying along with the antibiotics to kill this red cell parasite.

The lab verified the anemia was regenerative, so Rory felt he was on the right track. He added prednisolone to the meds on recheck to slow down the body's own reaction against the defective cells. On last recheck Pumpkin was doing great. He is less yellow these days and the family is whispering about castrating him. 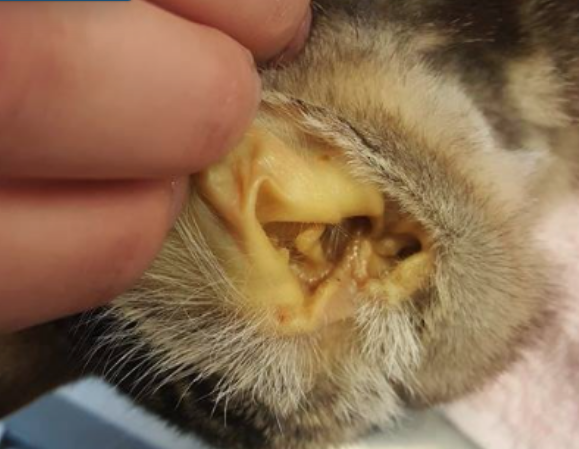 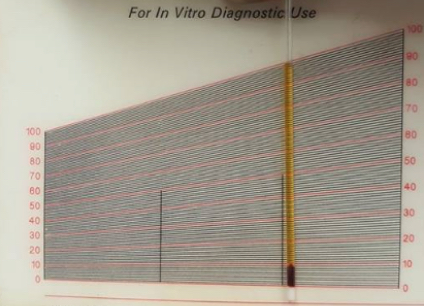 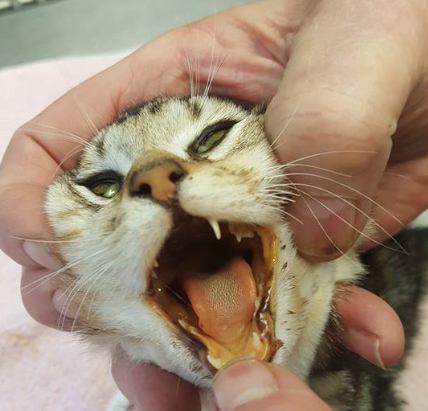