Evolution of the Earth Goddess

Early civilization worshipped a Great Goddess who represented fertility and the earth.

The earliest depiction of a human is a woman's pelvic area. Two upright legs support a woman's pubic triangle. The charcoal drawing is over 30,000 years old, one of the oldest paintings in Chauvet Cave. The bull was painted over it at a later time. At this early time in humankind's religious development, the Great Goddess was equated with the earth. Early peoples observed that the Earth, like women, gave birth, nurtured, and finally “took back” life into some mysterious underground realm (Womb/Tomb) to return again in the springtime. That's why caves were so important. However, as agriculture developed humans realized that by looking at the sky the year could be divided into repeatable seasons. That's when the Earth Goddess morphed into a sky deity. The planet Venus was particularly attractive to these early farmers. In ancient Mesopotamia Inanna was the Queen of Heaven and goddess of fertility and war, and her known period of worship was circa 3500 BC to 1750 BC, with cult centres at from Uruk to Nineveh.

Here is Inanna, the earth goddess of the ancient Sumerians, the ancient people living in the Cradle of Western Civilization between the Tigris and Euphrates Rivers. She was known as the "Queen of Heaven." Identified with Venus, Inanna was a snake goddess and originally a vegetation goddess. She was patron of the vine, of flocks, herds, with an associated snake iconography. Inanna’s prime concern was with the fertility of the earth and, in conjunction with the shepherd-god Dumuzi she was the source of universal life. All life in ancient Mesopotamia was conceived as the result of the union between earth, water and air as the personified goddess. Innana was the Sumerian Queen of the Land and source of the blood of the earth. Also Queen Moon, Great Goddess of the Bronze Age, ruler of stars, planets and rain clouds, accompanied by winged lions. She was the great Sumerian Mother goddess and later identified with the Babylonian Ishtar.

Marriage evolved as an institution following the introduction of the sacred marriage to the goddess Innana around 2350 B.C.​

Inanna’s cult of the earth was synchronised with seasonal cycles in both myth and ritual where the goddess as Inanna/Ishtar “…represented the source of all generative power in nature and in mankind as the Universal Mother.

Before the idea of marriage between gods developed, families consisted of loosely organized groups of as many as 30 people, with several male leaders, multiple women shared by them, and children. As hunter-gatherers settled down into agrarian civilizations, society had a need for more stable arrangements. Once better farming methods developed, people began to grow more organized and build cities. Leadership and military might became more valued than agriculture. Patriarchy came to dominate.

In Mesopotamia the goddess was the first cause and thus the dominant figure.The symbolism of the sacred marriage between the goddess and the god, who was her husband/brother.

The ritual and symbolism reached its climax at the seasonal spring sacred marriage, which is represented visually in Akkadian seals. In these seals the Mother-goddess is shown with tree branches, the sacred tree the symbol of the goddess.

Inanna promised herself to the King every spring. The holiday was celebrated in the city-states to secure fruitfulness to the crops, the people, their flocks and herds and the whole land.

The Tree of Life

During the transition from food gathering to production of food during the Neolithic, the female principle continued to exert its prominence in the feminine cultus. With regard to the female principle and the Tree of Life the imagery of fecundity and birth mystery harks back to the Palaeolithic.

In Mesopotamia, Syria, Anatolia, Greece and other locations, the Sacred Tree symbolized the generative principle in nature personified in the Mother Goddess called Ninhursaga, Inanna, Ishtar. Throughout the ceremonial and ritual process it was the goddess who was regarded as the incarnation of the reproductive forces in nature and the Mother of the gods and of mankind; the sacred tree was the embodiment of the goddess, often in association with her young virile partner, husband, son, or paramour.

The Male Takeover of Religion in Egypt

Unlike Mesopotamian religion Egypt's creative activities were centred on the male gods because the Amun priesthood was an early patriarchal society where the goddess had no role in the mystical concepts concerning conception.

The role of mother goddess was assigned to Hatho 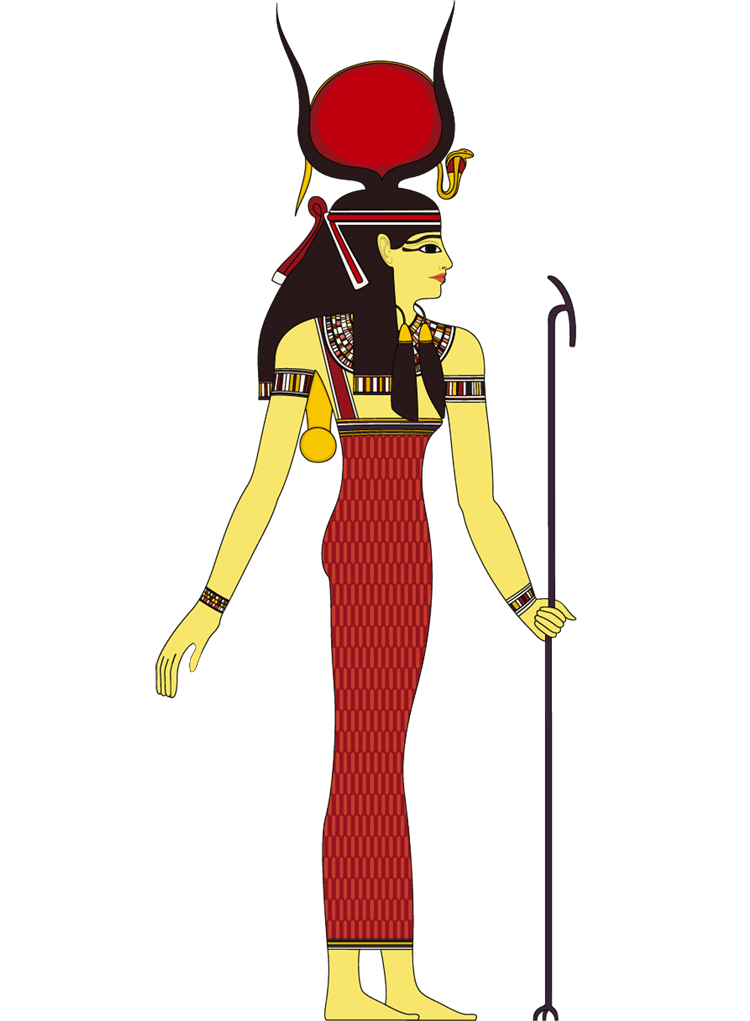 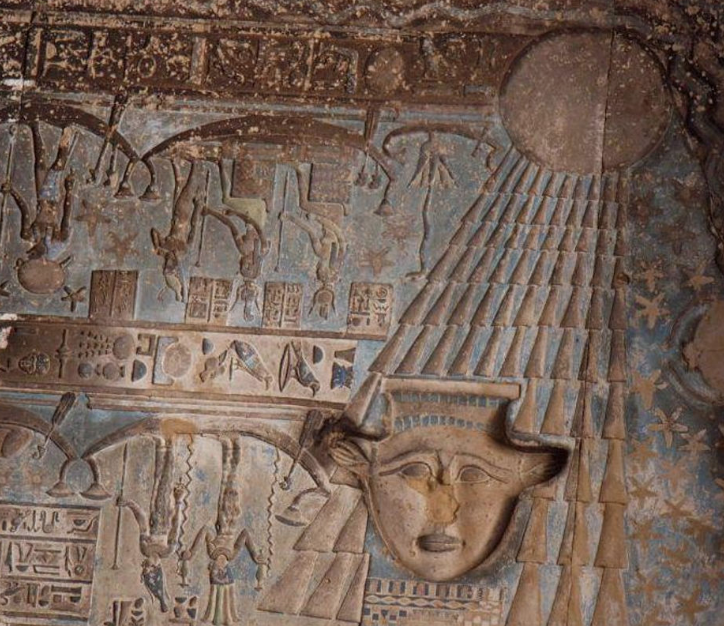 In early texts Isis was not the queen-mother but creatrix of the pharaohs who were called the ‘sons of Isis.’ Images of the Mother Goddess are amongst the earliest found in ancient Egypt. There is an association of the goddess with animals such as the lioness, the cow, hippopotamus, white vulture, cobra, the scorpion, and the cat. As a mother goddess she was also associated with the sun, the earth, the night sky and the primordial waters. Reverence for the Mother Goddess continued into historical times such as for Hathor and Isis. Oracles associated with these deities advised the rulers of Egypt, and The Two Ladies who were Wadjet and Nekhbetwho remained as patron deities of the Rulers of Egypt in every dynasty.

​Known as the morning and evening star, Ištar's primary symbols were the lion and the eight-pointed star. She was associated with the planet Venus and subsumed many important aspects of her character and her cult from the earlier Sumerian goddess Inanna.

Goddesses, and the women's voice as well, became subordinate during the bronze age. This was the time men developed weapons of war. Before this era of rulers arming many men with weapons the closest anyone came to war were minor disagreements over territory disputes between clans, but with the advent of the weaponized city-state, war became a way of life.

Where before the major deities had been earth goddesses representing fertility and growth, sky gods representing power came to prevail. Warrior gods such as Marduk, Utu, Re, and Amun developed in Sumer and Egypt. Mother figures such as Tiamat and Eve not only were subordinate to males, but also had a negative function in religious stories.

The subordination of the Great Goddess can best be seen in the rise of the Abrahamic religions, Islam, Judaism, and Christianity.

Not only did goddesses become less important, but they sometimes even carried a negative role in religion. This change can be seen in the reversed role of snakes in myth. Snakes were originally a representation of positive forces and symbols of the goddess, but as the religion shifted they became evil figures such as dragons who were conquered by gods or heroes. The villification of the goddess is also apparent in the myths of a woman bringing destruction through curiosity in stories such as those of Eve and Pandora.

Malidthu had Her most famous shrine at the spring of Aphek, (the modern Afka), whose name, appropriately, means "Spring". There the river named for Her son Adonis (now the Nahr Ibrahim) has its beginnings in the side of a cliff, dramatically bursting forth from a huge cave in a torrent, and flowing in a series of waterfalls into a steep and heavily forested gorge. (Oh my gawd is it gorgeous—go Google Image "Adonis River" and "Nahr Ibrahim" and see if you don't agree!) At Her nearby shrine was a sacred lake, into which a meteorite (or "fire") had once fallen; this was said to renew the youthful beauty of the Goddess. This meteorite was then set up in Her temple there as Her image. Depending on the source, this temple was said to be dedicated to either Malidthu, Ashtart, or the Ba'alat Gubla, the Lady of Byblos, a title of Ashtart in Her role as supreme Deity of Gubla or Byblos, a city not far from Aphek.

His association with Aphrodite and Persephone obviously plays on the themes of life and death in His legend; however on seeing pictures of His river and the cave it spills from, I'm inclined to think that additionally, while the loveliness of its location connects it with Aphrodite, the cave, always an entrance to the Underworld in myth, connects it to Queen Persephone and Her realm.

The tangled strands of the legends may point to an ancient practice of sacred marriage, in which the king or lord ("Adon", which is after all a title rather than a genuine name) was ritually wed to the great Goddess Ashtart. Each successive king would perform the same ritual, which would account for the confusion between the generations and the references to incest—Aphrodite (equated by the Greeks with Astarte, their name for Ashtart) woos both father and son; and the name of Cinyras is the same as that of Malidthu's son, Kinaru, for both mean "lyre". The temple to Malidthu at Aphek was by later writers said to belong to Astarte, and most probably Malidthu is to be taken as a form of that great Goddess, who gives birth to beautiful offspring.Also called: Mldth or Mr in the Ugarit texts; Mulitts, Mu Allidta, Mirru; among the Greeks She could be Mylitta, Melita, Molis, Myrrha, or Syyrna, another name for the myrrh-tree The Great Goddess of ancient Middle Eastern religion, then, has changed greatly over the millennia. Originally a Paleolithic fertility goddess and a mother earth figure, she was the main deity of many religions. With the rise of more patriarchal society, sky gods became more important and dominated the earth goddesses of Sumerian and Greek myth. The Great Goddess became divided into her many aspects who were defined according to their relationships with gods. Later when Catholicism became the dominant religion of Europe, goddess-worship disappeared completely. Yet remnants of the feminine divine can be found in the Virgin Mary, Sophia, and the female saints. Female religious figures disappeared almost entirely with the Protestant Reformation and in mainstream America there is still no single female role model. Yet neo-pagan goddesses are growing in popularity and many places of worship now acknowledge God as both male and female.

Evolution of the Earth Goddess, Chapter 6 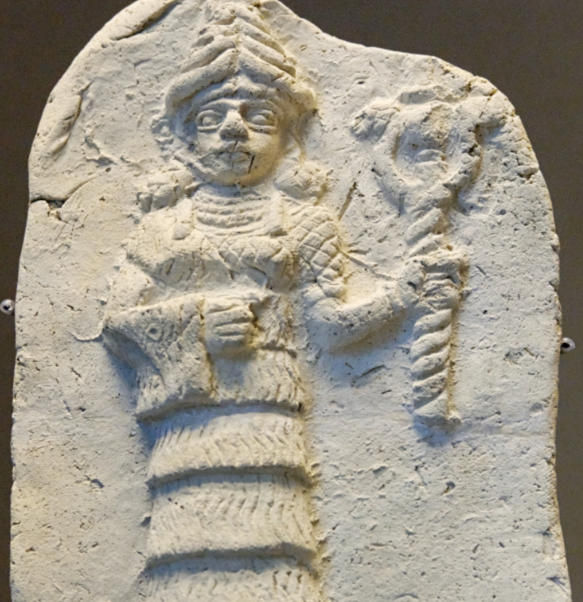 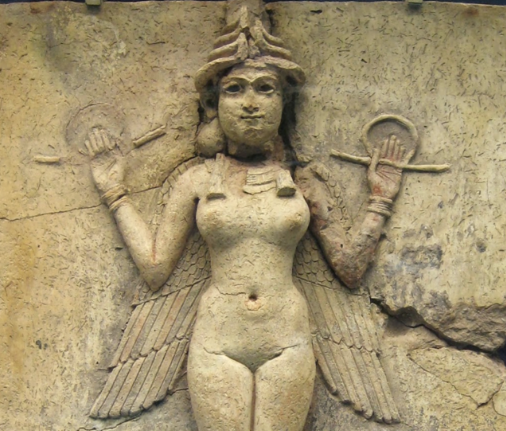 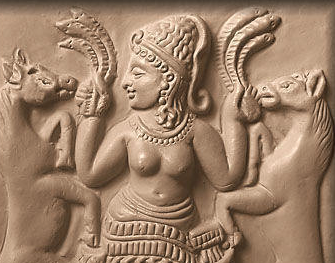