"The government is constantly updating the guidelines a vet must follow when approaching a suspected horse. Currently, we are told to wear splash-proof overalls with long sleeves, impervious boots, double gloves, a face shield or safety glasses, and a P2 particle respirator to prevent inhalation of aerosols."

-Chapter 13, Death From Down Under

“Hendra is a living nightmare! Vet students learn zoonotic diseases during school, but this virus is sneaky as well as deadly.”

“What do you mean when you say zoonotic?” Jen asked.

“Those are diseases that can jump from animals to people.”

“And what do you mean by saying this virus is a sneaky one?”

“After the first two incidents occurred in Hendra the virus disappeared again.”

“Plus unlike any other virus we have seen there is a direct effect on the equine practitioners as well as their technicians,” Carrie said. “That is exactly why I quit working directly on animals."

“It’s creating an atmosphere of frustration and resentment among the equine vets in Queensland,“ the doctor added. “Many vets who practice on all animals have quit treating horses, and this leads to more work for the remaining ones. And some of the horse vets will only see healthy animals and refuse to deal with sick horses. That causes the other equine vets to grumble that these vets are choosing easy money over hard, dangerous money. It's quite an unpatriotic showing.

And the Queensland government is not helpful,” the doctor continued. “Current legislation has declared private veterinarians are responsible for the safety of all persons in their workplace, both in the clinic and the field. Of twenty veterinary professionals queried in Queensland, seven of these vets had dealt with a confirmed case of Hendra, and four of them reported ceasing the equine practice. Veterinarians have a legal right to refuse service if they feel compromised, but this would lead to income loss as well as possibly tarnishing their reputation.”

“What a crappy situation!” Jen said.

“Exactly,” the doc replied. “And what makes the problem worse is the government is constantly updating the guidelines a vet must follow when approaching a suspected horse. Currently, we are told to wear splash-proof overalls with long sleeves, impervious boots, double gloves, a face shield or safety glasses, and a P2 particle respirator to prevent inhalation of aerosols. When finished these articles need to be thoroughly disinfected or disposed of before the vet leaves the premises!”

“All that to check on a sick horse! Unbelievable!” added Carrie.

“Dr. Leighton, I have another question,” Jen said. “How do the horses get the infection from bats. Do the bats bite them?"

“There doesn't have to be a bite to pass the infection. The bats only need to soil the horse’s food with their secretions. Urine, feces, and fetal fluids expelled during birth contain millions of virus particles. When animals eat contaminated feed, they pull the Hendra virus into their body.”

"And how are people infected?"

"How was it diagnosed?"

“August 1994, two horses died within a few days in the northern Brisbane suburb of Hendra. Those two horses were the ones attended to by Holly’s employer. The first horse died and the second wasn’t responding to treatment. That was when the doctor called Holly out. A private laboratory said the death was due to avocado poisoning and also said the second horse died from snakebite! That’s how totally in the dark we were Jen!”

“A week later, both the veterinarian and Holly were in different hospitals fighting for their lives. Even though they were in intensive care, they both died.

“They shut the track down? Wow!”

Carrie nodded. “A total of thirteen horses were dead or were euthanized. It was during this second outbreak that samples revealed the appearance of a hitherto unknown virus. The virus was named Hendra because that was where it was first discovered. They developed a reliable test using the viral footprint and found seven horses infected at Vic's place. All positives were euthanized even if they appeared normal and healthy. We were scared shitless Jen. But then no more problems were seen until January 1999…”

Umm, hmm. A dead horse was diagnosed with Hendra virus in Townsville, a fifteen-hour drive north of Brisbane.”

“Yes,” said Carrie “and then Hendra disappeared for another five years until October 2004 in Gordonvale, a four-hour drive north of Townsville. The veterinarian who performed the necropsy on the dead horse became critically ill but survived in intensive care. Blood tests on the vet were positive for the Hendra virus. As you see it just pops up here and there willy-nilly, but it is very deadly to people as well as horses.

And, there’s more. In December 2004 another dead horse in Townsville tested positive for Hendra.

In June 2006, Dr. Rebekka Day was the first vet to diagnose a sick, although still living horse with Hendra. The incident occurred in Peachester, one hour north of Brisbane.

After that, it was October 2006, when the first case of a horse dying from Hendra in New South Wales, the state south of Queensland, was documented in Murwillumbah, one and a half hours drive south of Brisbane.

In June 2007 another horse died of Hendra virus in Peachester.

August 2009 In Rockhampton, a seven-hour drive north of Brisbane along the coast, another deadly outbreak occurred which took the life of veterinarian Dr. Alister Rogers.

In May 2010 Hendra outbreak was found at Tewantin, a two-hour drive along the coast north of Brisbane.

In June 2011 multiple Hendra cases were found throughout Queensland.

“Yes, but the story stops here because there haven't been any new cases since then,” Carrie declared gathering her papers.

Choose a selection below 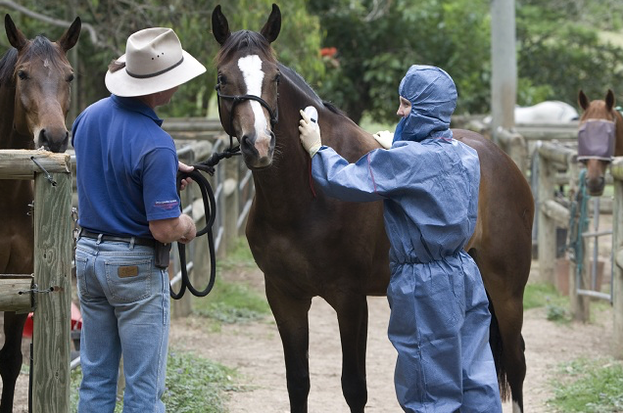 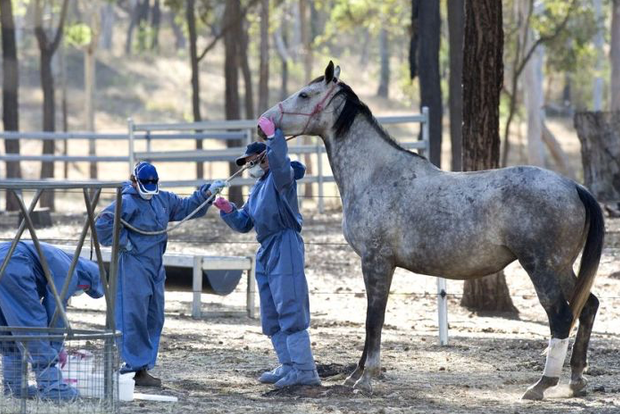