The next week I drove back out to Creston and Mary, and I made into San Luis for drinks. I paid for the drinks. Afterward, we went to see a movie. Just as we were about to buy tickets my pager went off. I left to find a pay phone to call the answering service. I scheduled the problem for a call the next morning, joined Mary again at the movie marquee, and dug my money out of my pocket. To my chagrin, I realized I spent too much money on drinks, and I didn’t have enough for the movie. At that time in my career, I didn't have a credit card. I asked Mary if she had some money I could borrow. She lent me the money and evidently forgot about the incident because she never asked me to pay her back. As the movie ended, and we walked outside into the night, I realized we were under a full moon. I suggested we drive out to Oak Country Ranch where I had my trailer. We walked around the pond and up and down large hills watching the fog from our breath become illuminated like the moon. As I drove Mary back home, there was little to say because we still had little in common. I dropped her off, agreeing to call about her foal in the next week or so.

As the full moon began to wane, I thought of more options to become more involved in Babe’s foaling. I was giving equine reproduction lectures to my clients. So far, these talks covered getting the mare pregnant as well as maintaining a healthy pregnancy. Realizing I could make a grand finale to my lectures by showing a video recording of a birthing, I called Mary to get an okay for the project. She thought it was a good idea, mainly because it meant there would be a veterinarian already present for the birth.

I picked up a video camera, camera stand, and lights and arrived at Mary’s ranch on Saturday. She called it Shadowmere Farms, a name given by a previous owner..

I checked the mare out and walked around the barn settling on a place to shoot the scene. Mary brought Babe into the camera with a halter on, so I started the video, pointing out the signs indicating birthing was imminent: Babe’s teats were showing wax on them. The mammary glands were filling with milk to the point there were drops of hardened colostrum on the nipples causing the visual comparison to wax. Also, the sacroiliac ligaments were loosening. These ligaments connecting the tail to the hind legs were loosening to allow a full-term foal to slide through the birth canal easily. A hollow develops on either side of the rear as muscles of the hip and buttock area start to relax.

There we were, the camera was set up, the mare was in place hormonally and physically for foaling, and a bottle of champagne was chilling in the refrigerator. However, Babe was not ready to let go of her foal. I filmed the precursor signs of foaling, and now we hunkered down in the cold February night to see if a baby would come soon. Mares have a unique mechanism where they can stop impending foaling if they feel an element of danger is present. They are flight animals and this ability evolved over thousands of years. Babe must have sensed the new lights, the new stranger, and the increased attention was not conducive to foaling. She showed no signs of progressing past stage 1 of parturition.

Stage 1 occurs when the foal moves towards the birth canal. The baby usually lies on it’s back during most of the gestation. As Stage 1 labor develops the baby gradually turns up onto its belly and lines the front feet and head into the birth canal. The mare's cervix will slowly open, and when the horse decides to further the birth, she will enter Stage 2 of parturition.

Stage 2 occurs when the cervix of the mare fully dilates; now the baby can come out. The expulsion of the fetus begins once the cervix is open and the uterine and abdominal muscles start their forceful contractions.

Slipping on a long sterile sleeve, I dribbled KY gel on it and went into Babe’s vagina to assess the status of her cervix. Advancing two of my fingers in, I knew Stage 2 had begun. Now I could hasten delivery using an oxytocin injection, a birthing hormone synthesized by the pituitary gland in the brain. It is released during the birth process and induces uterine contractions and stimulates milk letdown.

Babe settled onto her side fifteen minutes later while the contractions of the abdominal and uterine muscles helped the foal advance through the birth canal. Soon the two front feet of the foal protruded through the vulva, encased in a thick white colored membrane called the amnion. Grabbing the exposed legs, I gently pulled them down and towards me until I saw the foal's head. I tugged again, and once the shoulders were free of the birth canal, the rest of the baby slid out, still encased in the thick white amniotic sac and attached to the placenta via the umbilical cord. I ripped open the amniotic sac at the head area and shook the head to clear the nostrils of fluid. The foal started breathing on his own. I let both the mare and the foal lie quietly for a few minutes to allow as much blood as possible to drain from the placenta through the umbilical cord and into the baby.

I was pulling the remaining amniotic membranes off the foal when Babe stood up, ripping the umbilicus free. Turning towards her foal, she nickered and began to nuzzle it, making soft whinnying sounds as she attended to her baby. After lying on the ground for twenty minutes, the foal began to struggle. It righted itself, pushed out both front feet, and teetered to a wobbly sawhorse stance. I checked Babe’s mammary glands by touching the two nipples. They were not painful. With two fingers I squeezed each nipple until I expressed milk. The milk was somewhat yellow because of the colostrum. I placed my fingers in the foal’s mouth, and he responded by immediately sucking on them. He had an excellent suckle reflex.

Everything seemed in place for routine nursing, so I gently pushed him toward the mammary glands. After some false starts on sites other than one of the two nipples, the foal did find the milk spigots and began suckling.

Now I needed to help Babe finish the third stage of labor, which is the expulsion of the placenta. The amniotic sac is the actual balloon that encases the fetus and allows it to float in the liquid amnion fluid during the pregnancy. The placenta encloses the entire fetal complex and intimately attaches to the wall of the uterus. This close attachment to the uterine wall allows the blood vessels of the placenta to develop next to blood vessels of the mare and is the way the foal derives his oxygen while he is growing inside mama. Soon after birth, the placenta detaches itself from the uterine wall, usually expelled within 15 to 60 minutes after foaling. I gently tugged on the exposed part of Babe’s placenta and slowly teased it out of the uterus until it plopped onto the ground.

Infertility resulting from infection occurs if pieces of the placenta remain attached to the uterus. Therefore, I needed to make sure Babe expelled the entire placenta, so I carefully laid it on the ground arranging it to look like the head of a bunny with two big long ears. The body of the placenta was the head, and the two long horns of the placenta were the ears. I needed to make sure each ear had its rounded end piece attached. Once I made sure the entire after birth was intact I examined Babe’s vagina to see if the delivery had caused any tearing of the vagina. There was some bruising, but no tears in the vaginal wall. I was happy. There were no problems with this delivery.

I delivered Babe’s colt on February 23, 1985. Mary and Melenie called the horse “New Moon” because he had a sliver of white on his head. After we shared champagne, Mary and I retired to her house and Mary invited me to share her bed. I suggest both of us had a new moon experience that night. Mary had a new horse, and I had a new relationship.

My Girlfriend's a Star! Fire!

Order a paperback from Amazon for $14.95 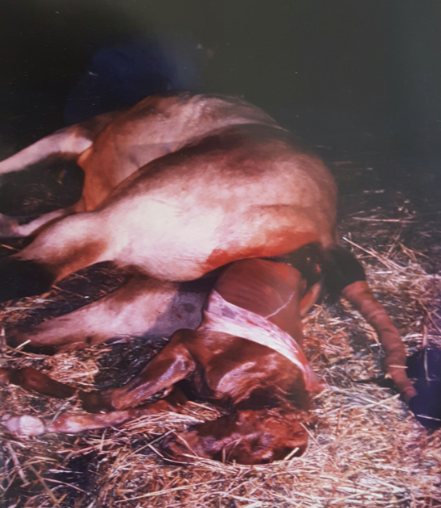 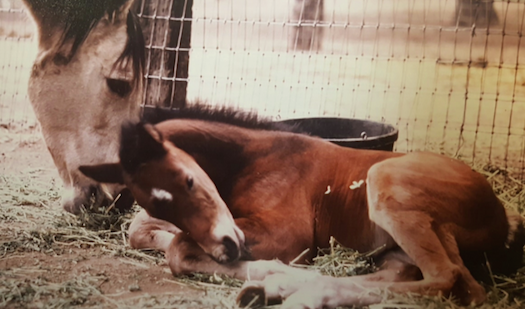 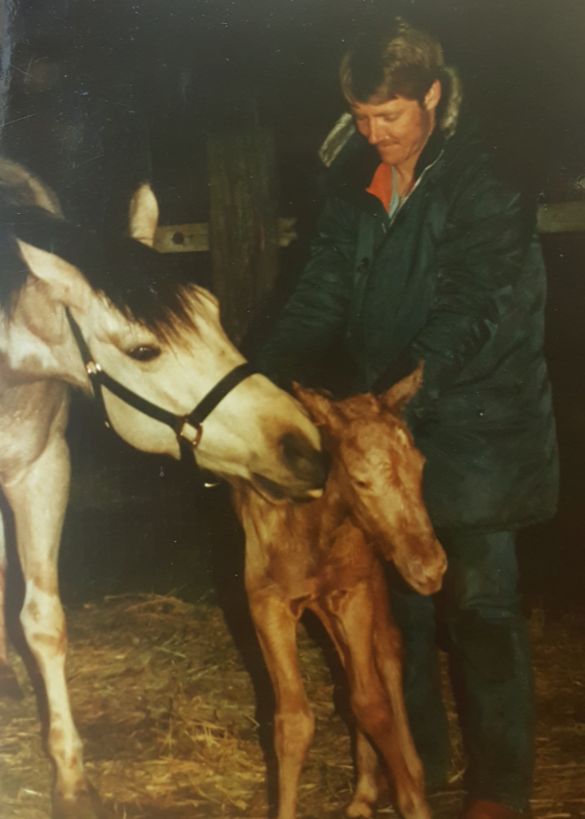